Milkwood Manor on Sea was honoured on Friday 16 June when Dr. Ivan Meyer and his delightful family stayed with us for two nights over the Youth Day weekend. The Minister of Cultural Affairs and Sport made full use of the Manor’s tranquil environment before setting out on a gruelling cycle tour with the Western Cape’s Premier Helen Zille, from Plettenberg Bay to Khayelitsha in their “Better Together” Campaign. The trip coincides with the 18 June international “ride to work day”; when people around the world are encouraged to commute to work on scooters, motorcycles and, ideally, bicycles. The day aims to highlight the benefits of using non-motor vehicle personal transportation such as:

From Sunday, 17 June to Thursday, 21 June, Premier Helen Zille will be cycling with a group including provincial Cabinet Ministers, the Bicycle Empowerment Network, Cycling SA and some of their staff, some of whom work on projects like Shova Kalula and Safely Home, from Plettenberg Bay to Cape Town in stages. 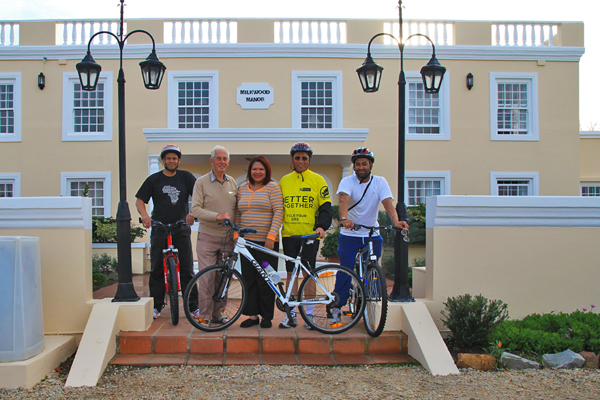 Milkwood Manor’s owner, Kees, The Minister and his wife, flanked by two bodyguards

During the Cycle Tour, the group will stop in Knysna, George, Mossel Bay, Albertinia, Riversdale, Swellendam, Hermanus, Strand and Khayelitsha to take part in events where they will hand over more than a hundred bicycles to people to enable them to fulfil their responsibilities better.

The bicycles and other equipment will be given to neighbourhood watches, chronic-medication dispensing units, farm-worker development programmes and schools.

The Western Cape Government spends more than R1-billion each year on diseases that could be significantly reduced if everyone made healthier choices about their lives and sexual behaviour. Says Premier Zille “This Cycle Tour not only demonstrates our active commitment to those lifestyle choices, it is an opportunity for me to take this important “Better Together” message out to the people themselves. We will continue providing excellent health services to the Western Cape, but it is everyone’s responsibility to keep themselves as healthy as possible.”

Direct Comments from the Minister:

“On a guided tour through Milkwood Manor, I immediately noted the influence of Asia, Africa and Europe in the décor and ambience. I appreciated this, since people of South Africa have been influenced by these three continents. As the minister responsible for heritage I saw how Milkwood Manor was transformed from 1996 in to the jewel of Plettenberg Bay.”

“This is my second visit this year to Milkwood Manor, and I see this as confidence in your service and your philosophy of customer satisfaction. I’ll be back…!” ((sic)Minister of Cultural Affairs and Sport, Dr. Ivan Meyer)

Milkwood Manor heartily supports this cause. We feel privileged to have received the news of this latest initiative first-hand from the Minister and wish him every success with an endeavour that will be of benefit to us all.