In Plettenberg Bay we have a secret season that not many know about. It falls outside of the busy, more popular times that visitors come to enjoy our little paradise. It is known as “Whale Season”. Plett is blessed annually with the return of giant marine mammals that inspire awe and wonder. Southern Right, Humpback and Bryde’s are just some of their names. 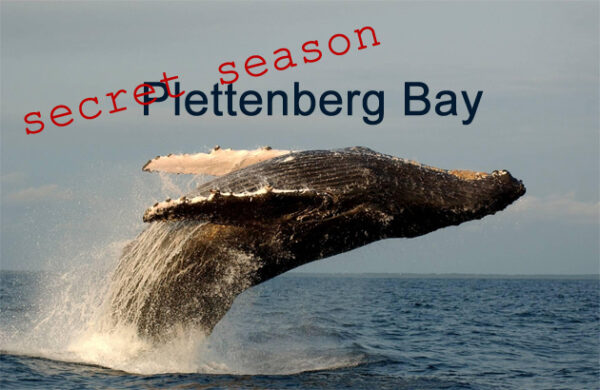 The best time for watching the southern right whale in South African waters is from June to November along the Cape south coast, although some will already be as far north as KwaZulu-Natal. Peak calving season is July and August, but whales can be seen through September and October.

The curious humpback whale can be seen between May to December, moving up along the coast from Hermanus to St Lucia in KwaZulu-Natal enjoying stopovers in the turquoise waters of Plettenberg Bay.

The medium-sized Bryde’s whale can be spotted all year round, and while rare, orcas can also be seen.

Plettenberg Bay, however, is one of the best destinations for whale watching in the world! Every year Southern Right and Humpback whales visit the sheltered bay to mate and calve. Visitors to Plettenberg Bay are treated to a spectacular display of breaching, tail and flipper slapping, sailing and spy hopping. It is in Plett that the dolphin and whale-watching industry is most organised, with trips in boats, kayaks and aircraft on offer. Viewing distances and time spent with each animal are strictly monitored so that there is minimal interference.

Guests of Milkwood Manor on Sea enjoy a discount on their boat based whale watching trips when booked through their travel desk, and assistance with booking kayaking and glider flights is only a pleasure. We hope to see you at Milkwood Manor in Plettenberg Bay’s Secret Season.