Saddle up for a new era in conservation

We recently got news that a Knysna Seahorse has been found in the Keurbooms Estuary. It’s the first time since the 2007 flood that one has been spotted so you can imagine our excitement at having this docile creature return to our back yard. We thought you’d enjoy some information on this most elegant of sea animals. 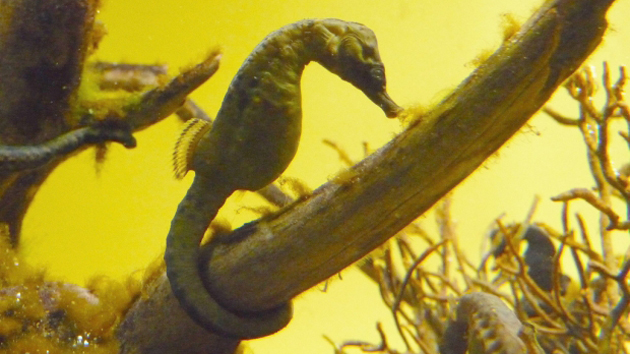 Seahorses have lived in the oceans for about 40 million years. They have a head shaped like that of a horse, a tail like a monkey’s and male seahorses have a ‘pouch’ like female kangaroos! The male seahorse gives birth to offspring – the female lays her eggs in the male’s pouch and when they are ready, the babies hatch out of the pouch into the water!

Seahorses are fascinating to watch – you may be lucky to see male and female seahorses in a coy courtship dance or even a male seahorse giving birth!

Seahorses breathe through gills, use their fins to move through the water and hatch from eggs. The largest seahorse measures 35 centimetres from the top of its head to the tip of its tail and the smallest seahorse is only 3 centimetres long!

Seahorses swim upright, propelled by their dorsal fin, while their small pectoral fins help to steer them as they glide along. Seahorses feed on small fish and shellfish, which they suck into their mouths. The eyes of a seahorse are like those of a chameleon – they move independently, one looking for food and the other watching out for predators. Seahorses are also able to change colour so that they blend into their environment.

The development of nearby towns is threatening the survival of the Knysna seahorses.  Houses and shopping centres are being built right on the water’s edge and polluted water flows directly into the estuaries where these seahorses live.  Boats and people in the estuaries are also disturbing the unique habitat of these animals.

We protect our seahorses

Fortunately, there is a law in South Africa that protects the Knysna seahorses. The law states that one is not allowed to catch these seahorses or disturb them in their natural environment. There are also strict laws about importing seahorses into South Africa from other parts of the world. 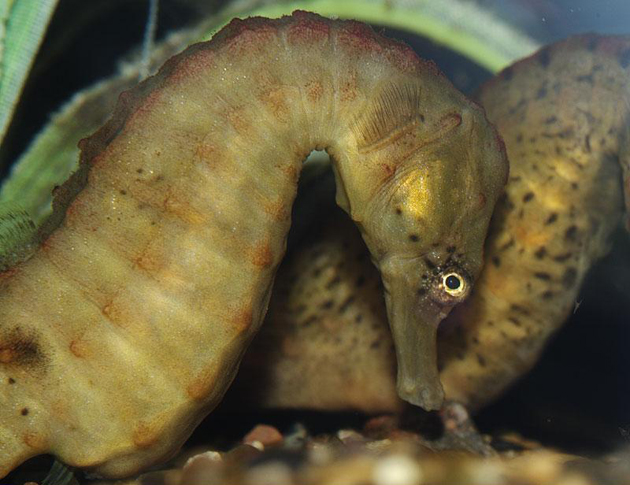 The Knysna Seahorse, Hippocampus capensis, is a species of seahorse which is highly endemic to a select few estuaries in the southern Cape. They are listed as endangered on the IUCN List of Endangered Species. They are the only species of seahorse found in South Africa and have been recorded only in the Knysna, Keurbooms and Swartvlei estuaries. Hippocampus capensis has many
distinguishing features. They have prehensile tails which they used to grip onto grasses and other materials. This is how they tolerate tidal movements and strong currents. They have eyes that can move independent of each other, one looking backwards and one forward. Their heads are shaped like that of a horse. They also have the features that define them as fish: gills, swim bladder and fins. They don’t have scales, rather a body covering similar to that of an insect (exoskeleton). These animals are protected by certain laws but still many of them are being removed from their natural habitat and put into aquariums, where most of them die, due to lack of knowledge about their ecology. These animals are visual hunter and require light to feed. If left in the dark for too long they will simply not eat and, thus, starve. They have no true stomachs and are, thus, grazing continually. Their diet consists mainly of small crustaceans; copepods and isopods. These animals are also intriguing in that the males carry the babies in a true
pregnancy, complete with internal fertilization. The males hold the eggs in a pouch made up of tissues with a capillary network. This network supplies the oxygen and fluids to the developing embryos. The males also give birth after two to three weeks. Only a few hours after the male has given birth, the female will deposit more eggs in his pouch. 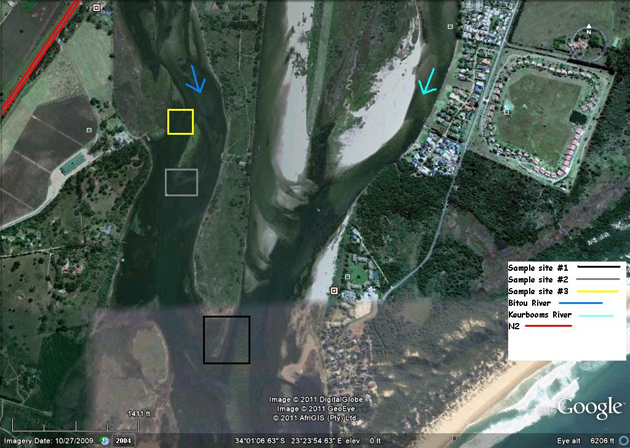 Study Area
The physical area studied for this project started at the confluence of the estuary where the Keurbooms and Bitou Rivers meet/ divide. The Bitou River was surveyed higher up as well, east of the N2 (between the N2 Bridge and the land formation). The largest and most dense Zostera beds were found further down the estuary, mainly at the base of the land formation. This land form is the last stretch of land that divides the Bitou and Keurbooms Rivers. These Zostera beds were deemed a good place for the seahorses to be found due to the fact that this is their main habitat type. The first study/sampling site was lowest on the estuary, in the largest Zostera beds that where found. The GPS coordinates for a square around the Zostera bed were taken. A set sample site area was not given due to the sampling being very random. The project was aimed at finding whether or not there are seahorses in the area. For this reason, the sample sites did not have to be the same size because they were not being compared. Also, the sample site sizes were dependant on the Zostera beds found and the beds in the different sites were different in sizes. The area on the lowest part of the estuary had a depth of approximately 1m all around. The depth would change depending on the distance from the shoreline as well as the tide. Closer to the shoreline, it would become shallower, and a higher tide would create deeper waters n all parts of the river. The water type is very much a mix between saltwater and brackish water. The Keurbooms River water was very stained by tannins. These leach into the water from trees which are situated very close to the river as well as leaves that fall into the water.