Milkwood Manor has been operating as a guesthouse the same spot for 16 years, but 5 years ago our landlocked establishment changed into prime oceanfront property – overnight! Here’s the flood story…

On 22 November 2007, a raging flood from the nearby Keurbooms River swept away over 300m of sand, rock and vegetation in one night. The Manor was spared by a reef of solid rock that redirected the flood past the guesthouse and out into the ocean. That night, at 7pm the alarm was raised – the river was right outside our Lemongrass restaurant! Luckily we were able to evacuate the guests and find them alternative accommodation while the storm and flood raged. All, that is, but two guests who had turned in early and did not hear the commotion or the knocking on their door. They awoke to find a deserted guesthouse and restaurant. Can you image their confusion at the sight of a river and the ocean at their door? 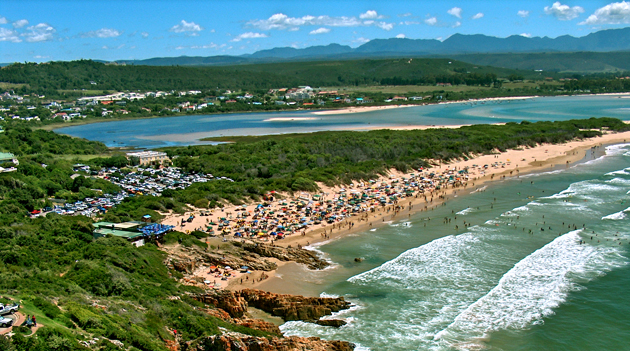 An entire stretch of land was washed away during the night and the Keurbooms River mouth had shifted over 300m. Trees, logs and branches littered the ocean and numerous river boats had been washed out to sea. It was a true natural disaster and one with surprising results for us at Milkwood Manor.

Our swimming pool had been replaced by a rushing river. Our rooms, once overlooking natural vegetation and our parking lot, now offer uninterrupted lagoon and sea views. The story of Milkwood Manor’s “relocation” has become a favourite with locals and travellers alike.

Today we can report that Mother Nature didn’t stop there and as is her way continued to alter the surrounding landscape of Milkwood Manor, again to our advantage and….

We now have the famous Lookout Beach back!

Gradually over the past six months since the minor flood in July of 2012 the ocean has been depositing sand where the river mouth was after the big flood of 2007. This was the result of another river mouth opening further up the Keurbooms Beach.

All who know this story and even us here at Milkwood Manor are perpetually in awe of the force of nature and the incessant continuation of raw power that shapes not only our immediate surroundings, but the entire earth.

Who knows? The next time you visit Milkwood Manor on Sea it may all look totally different again.