Fynbos of the Western Cape

(/ˈfeɪnbɒs/; Dutch pronunciation: [ˈfɛi̯nbos]) is the natural shrubland or heathland vegetation occurring in a small belt of the Western Cape of South Africa, mainly in winter rainfall coastal and mountainous areas with a Mediterranean climate. The Fynbos ecoregion is within the Mediterranean forests, woodlands, and scrub biome. In fields related to biogeography, fynbos is known for its exceptional degree of biodiversity and endemism.

The word fynbos is often confusingly said to mean “fine bush” in Afrikaans, as “bos” means “bush”. Typical fynbos foliage is ericoid rather than fine. The term, in its pre-Afrikaans, Dutch form, fynbosch, was recorded by Noble as being in casual use in the late 19th century. In the early 20th century, John Bews referred to: “South-Western or Cape Region of Macchia or Fynbosch”. He said: “In this well-known region where the rain occurs in winter and the summers are more or less dry, the dominant vegetation is of a sclerophyllous type and there is little or no natural grassland, though there are many grasses…” He also refers to a high degree of endemism in the grasses in that region. Elsewhere he speaks of the term as “…applied by the inhabitants of the Cape to any sort of small woodland growth that does not include timber trees”; in the current vernacular, this still is the effective sense of the word. However, in the technical, ecological sense, the constraints are more demanding. In the latter half of the 20th century, “fynbos” gained currency as the term for the “distinctive vegetation of the southwestern Cape”.

Fynbos – which grows in a 100-to-200-km-wide coastal belt stretching from Clanwilliam on the West coast to Port Elizabeth on the Southeast coast – forms part of the Cape floral kingdom, where it accounts for half of the surface area and 80% of the plant species. The fynbos in the western regions is richer and more varied than in the eastern regions of South Africa.
Of the world’s six floral kingdoms, this is the smallest and richest per unit of area. The Holarctic kingdom in contrast, incorporates the whole of the northern hemisphere north of the tropical regions. The diversity of fynbos plants is extremely high, with over 9000 species of plants occurring in the area, around 6200 of which are endemic, i.e. growing nowhere else in the world. This level of diversity is comparable to tropical rainforests or large islands and is unique in a relatively dry continental area. Of the Ericas, some 600 occur in the fynbos kingdom, while only two or three dozen have been described in the rest of the world. This is in an area of 46,000 km² – by comparison, the Netherlands, with an area of 33,000 km², has 1400 species, none of them endemic. Table Mountain in Cape Town supports 2200 species, more than the entire United Kingdom. Thus, although the Fynbos comprises only 6% of the area of southern Africa, it has half the species on the subcontinent – and in fact has almost 1 in 5 of all African plant species so far described.
Five main river systems traverse the Cape floral kingdom: the Oliphants River of the Western Cape; the Berg River which drains the West Coast Forelands plain stretching from the Cape Flats to the Olifants; the Breede, which is the largest river on the Cape; the Olifants River (Southern Cape); Gourits and the Groot Rivers which drain the Little Karoo basin and the South Coast Forelands; and the Baviaanskloof and Gamtoos Rivers to the east. 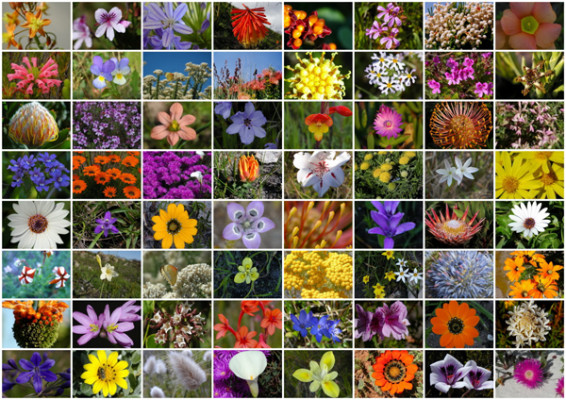 The most conspicuous components of the flora are evergreen sclerophyllous plants, many with ericoid leaves and gracile habit, as opposed to timber forest. Several plant families are conspicuous in fynbos; the Proteaceae are prominent, with genera such as Protea, Leucospermum (the “pincushions”), and Leucadendron (the silver tree and “cone bushes”). Proteas are represented by many species and are prominent in the landscape, generally with large striking flowers, many of which are pollinated by birds, and others by small mammals. Most of these do not have anything like ericoid leaves, and nor do most Rhamnaceae, Fabaceae, or Geraniaceae. Fynbos Ericaceae include more species of Erica than all other regions combined. They are popularly called heaths and are generally smaller plants bearing many small, tubular or globular flowers and ericoid leaves. Restionaceae also occur in greater variety in fynbos than anywhere else; their species are superficially grass-like. Many of them grow in wet areas such as seasonal marshes and spongy basins in the sources of mountain streams, but others grow in decidedly arid conditions. 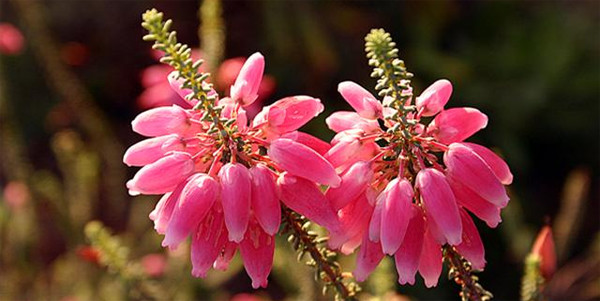 Depending on the locality and the aspects under discussion, several other families have equal claim to being characteristic, including Asteraceae, Rutaceae, and Iridaceae. More than 1400 bulb species occur among the fynbos, of which 96 are Gladiolus and 54 Lachenalia. Areas that are dominated by “renosterbos”, Elytropappus rhinocerotis, (Asteraceae) are known as Renosterveld (Afrikaans for “rhinoceros veld”).

The fynbos area has been divided into two very similar ecoregions: the lowland fynbos (below 300 m above sea level) on the sandy soil of the west coast, and the montane fynbos of the Cape Fold Belt.
The Lowland Fynbos and Renosterveld experiences regular winter rainfall, especially to the west of Cape Agulhas. The ecoregion has been subdivided into 9 areas: the West Coast Forelands from the Cape Flats to the Olifants River (Western Cape); the Warm Bokkeveld basin around the town of Ceres; the Elgin Valley around the town of Elgin; the sandy Agulhas Plain on the coast; the Breede River valley around the town of Worcester; the South Coast Forelands from Caledon west to Mossel Bay; the south-eastern end of the Little Karoo; Langkloof valley; and the Southeastern Coast Forelands west from Tsitsikamma to Port Elizabeth. 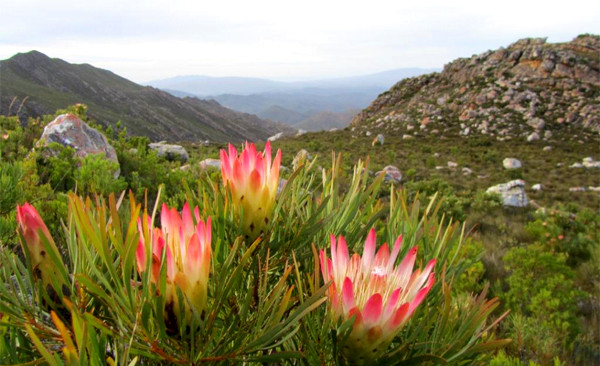 The flora of the lowlands contains a high number of endemic species, and tends to favour larger plants than those growing on the hillier areas. They include the larger Restionaceae such as species of Elegia, Thamnochortus, and Willdenowia and proteas such as king protea (Protea cynaroides) and blushing bride (Serruria florida). Particular types of lowland fynbos include the shrubs and herbs of the coastal sand dunes, the mixture of ericoids and restoids with thickets of shrubs such as Maytenus, and other Celastraceae, sideroxylons and other Sapotaceae, and Rhus and other Anacardiaceae on the coastal sands; the classic fynbos of the sandplains of the West Coast Forelands, and the Agulhas Plain; the grassy fynbos of the hillier and wetter areas of the South and South-Eastern Coast Forelands; areas where fynbos and renosterveld are mixed; coastal renosterveld on the West and South Coast Forelands; and the inland renosterveld of the drier inland Little Karoo and Warm Bokkeveld.

The area is also home to a large number of endemic creatures that have adapted to life in this area, such as the monkey beetles which pollinate Ixia viridiflora. Endemic species of fish in the five river systems occur in the area, too. Endemic reptiles include a number of tortoises and the chameleon-like arum frog (Hyperolius horstockii).
The Montane Fynbos and Renosterveld is the area above 300 m, a total of 45,000 km2 of the Cape Fold Mountains. The same level of floral variety, including all three characteristic fynbos families, is found there, but ericas predominate. Because the higher and wetter areas are more protected and contain important water sources, the original flora is more intact than in the lowlands; but agriculture and global warming are stll threats. The region includes the mountains in the west from the Cape Peninsula to the Kouebokkeveld Mountains, the south coast hinterland from Elgin to Port Elizabeth, the mountains north of the Little Karoo from Laingsburg to Willowmore, and the inselberg hills within the Little Karoo. About half of these areas are originally fynbos, and about half are renosterveld.

Many different microclimates occur, so the flora changes from west to east, and also varies with altitude up the hillsides away from the coast and according to compass direction. Lower elevations are covered with protea fynbos, with ericas taking over further up. Plant species include pincushions (Leucospermum). The wildlife includes a number of endemic bees, beetles, horseflies, and ants, and birds such as cape sugarbirds and the orange-breasted sunbird. Many of these birds and insects are important and specific pollinators for the fynbos, such as the mountain pride butterfly (Aeropetes tulbaghia) which only visits red flowers such as Disa uniflora and pollinates 15 different species. Larger animals include antelopes, particularly Cape grysbok (Raphicerus melanotis), common duiker (Sylvicapra grimmia), and klipspringer (Oreotragus oreotragus). The extinct blue antelope and quagga were also fynbos natives. 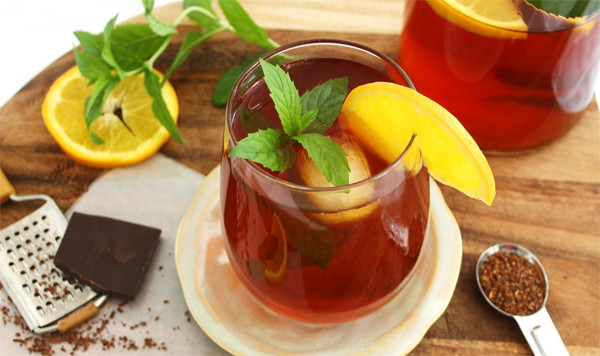 Rooibos (Aspalathus linearis) and Honeybush (Cyclopia intermedia) are of economic importance, grown and harvested in large quantities in the Cederberg area, and providing important exports. Restios continue to be used for thatching, as they have for hundreds or even thousands of years. Proteas and other floral species are grown in many areas and their flowers harvested for export.
In many areas with Mediterranean climates, fynbos species have become popular garden plants, in particular aloes and geraniums, and in cooler regions are used as window plants.
A very large number of fynbos plant species are used in traditional medicine, and while only a tiny proportion have as yet been subjected to formal testing, many have already been identified as having medicinal properties. Community conservation group for the critically endangered remnant of Lourensford Alluvium Fynbos at Harmony Flats, Cape Town. 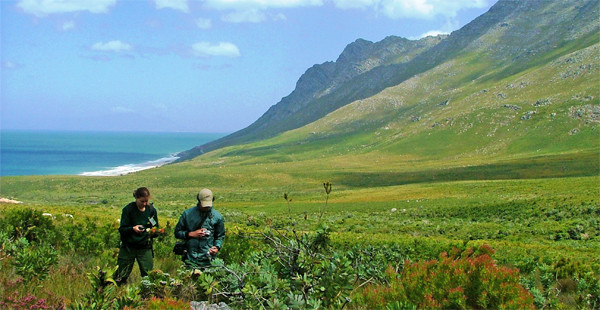 Large parts of the fynbos region have been inhabited for centuries, and only a small portion is protected. The lowland areas are especially prone to be developed for agriculture and viticulture, or through urban expansion along the coast especially around Cape Town and Port Elizabeth.
Fynbos areas are also threatened by the spread of invasive alien species, in particular wattle and acacia species from Australia, as well as pine plantations in the Cape Fold hills. Many species have become extinct, and more than 1000 are endangered. Their conservation is a priority, and reserves have been established in many areas.
Fynbos areas are a popular attraction for tourists, especially in the vicinity of Cape Town, and are also important recreational areas for locals. The Southern Cape coast is travelled by the Garden Route, while large areas of natural fynbos can be seen in Kirstenbosch National Botanical Garden in Cape Town. Table Mountain National Park covers much of the Cape Peninsula, and Tsitsikamma National Park is to the east. There are a number of published hiking routes from Cape Town and other towns such as Elgin. The centre for visiting the Little Karoo is the town of Oudtshoorn, called “the ostrich capital of the world”.