A small flock of Greater Flamingos calls Plettenberg Bay a holiday home most parts of the year, and can be seen in the Keurbooms lagoon adjacent to Milkwood Manor on Sea Guesthouse. Here is some information on these majestic birds to add to your general knowledge…

The greater Flamingo is the largest species of flamingo, averaging 110–150 cm tall and weighing 2–4 kg. The largest male flamingos have been recorded at up to 187 cm tall and 4.5 kg. It is closely related to the American flamingo and Chilean flamingo, with which it has sometimes been considered conspecific. 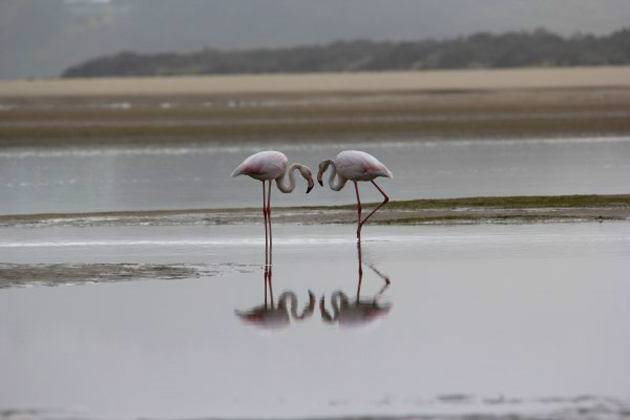 Like all flamingos, this species lays a single chalky-white egg on a mud mound. Most of the plumage is pinkish-white, but the wing coverts are red and the primary and secondary flight feathers are black. The bill is pink with a restricted black tip, and the legs are entirely pink. The greater flamingo’s call is a goose-like honking.

Sub-adult flamingos are whitish-grey and only attain the pink coloration several years into their adult life. The coloration comes from the carotenoid pigments in the organisms that live in their feeding grounds. Secretions of the urpoygial gland also contain carotenoids. During the breeding season, greater flamingos increase the frequency of their spreading uropygial secretions over their feathers and thereby enhance their colour. This cosmetic use of uropygial secretions has been described as applying “make-up”. 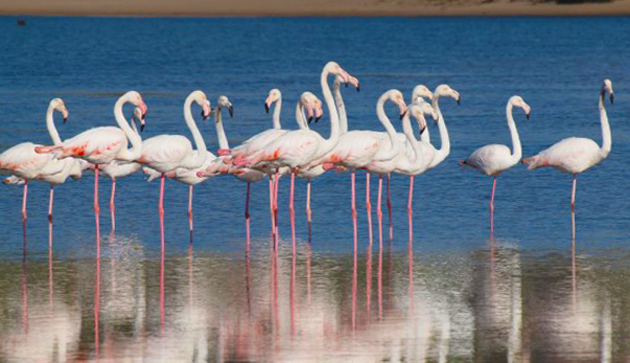 The bird resides in mudflats and shallow coastal lagoons with salt water. Using its feet, the bird stirs up the mud, then sucks water through its bill and filters out small shrimp, seeds, blue-green algae, microscopic organisms and molluscs. The greater flamingo feeds with its head down and its upper jaw is movable and not rigidly fixed to its skull.